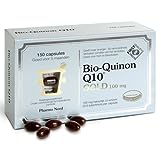 What does coenzyme Q10 do?
Coenzyme Q10 is an essential cofactor of enzymes involved in the energy production process. Coenzyme Q10 is stored in mitochondria, structures found within cells responsible for the generation of energy (in the form of a molecule called ATP). Tissues with a high-energy requirement (heart, liver, skeletal muscles) contain higher numbers of mitochondria within their cells. Coenzyme Q10 is also important within the body as a major fat-soluble antioxidant, protecting cell membranes from the damaging effects of free radicals, in a complementary manner to vitamin E. Coenzyme Q10 promotes healthy cardiovascular function, and healthy immune function (cells involved in immune response have a high energy dependence).

How much should I take?
The generally recommended intake for coenzyme Q10 is 30 to 200mg/day, taken with meals, to enhance absorption.